Looking for a low-carb replacement for spaghetti? Try spaghetti squash.

Instant Pot spaghetti squash cooks faster than in the oven! This is one of my favorite meals when I don’t want to be in a food coma.

Spaghetti squash has little taste on its own. But when it’s paired with spaghetti sauce and parmesan cheese, it tastes pretty close to real spaghetti.

The texture won’t be exactly like noodles but it will have a bit of a crunch.

When choosing a spaghetti squash, I highly recommend getting a 2 or 3 pound one. This is so it will fit into the Instant Pot.

Anything bigger and you will have to cut it down and cook it longer.

I have seen other blogs only mention one cooking time for spaghetti squash but the problem with that is it comes in different sizes. One size fits all does not work with spaghetti squash.

And as with everything else, it’s going to be trial and error. I list recommended cooking times here but they are not guaranteed… So if your squash is too al dente, put it back into the Instant Pot and add more time.

In the video above, I show you what happens when spaghetti squash is overcooked. It clumps up leaving you with very short strands of “noodles.”

So it’s better to be conservative with the cooking time and add a few more minutes if it’s not cooked to how you like it. 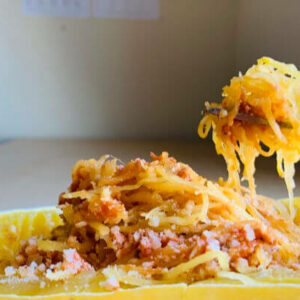 Fanny Camota
Make this satisfying and guilt-free spaghetti squash in your Instant Pot! It cooks faster in the Instant Pot than in the oven!
No ratings yet
Print Recipe Pin Recipe
Prep Time 10 mins
Cook Time 15 mins
Servings 2