If you’re fascinated with baking donuts at home, try these chocolate mochi donuts. They’re crispy on the outside and soft and moist on the inside, kinda like a decadent, crunchy brownie.

These baked chocolate mochi donuts are dense, heavy in weight (feels like a pound but it’s not), and are crispy on the outside. Once you bite into it, it’s soft and chewy inside and has the right amount of sweetness.

But I have to warn you that baked donuts don’t taste the same as fried donuts. They come out more like muffins baked into the shape of a donut. It’s kind of deceiving, right?

So I didn’t know what I was getting into when I set out to bake donuts at home. I got my donut pans and tried out different recipes.

Let me tell you, it’s hard to find a good baked donut recipe! My friends on Facebook said the same thing.

So the second attempt were these chocolate mochi donuts from Snixy Kitchen. And she got it right!

I also changed the chocolate glaze to a melted chocolate glaze, that’s not super sweet but still rich and decadent, thanks to bittersweet chocolate and melted butter. Most glazes are mostly powdered sugar and that’s too sweet for me.

It was love at first bite! For real! Like I bit into it and was screaming,”Yes!” in my head.

And if you want to test out how good a donut recipe is, you give it to your family. I have my husband and my daughter (who will eat almost anything), my 3 year old son (who’s kinda picky), and my in-laws. My father-in-law is particular on what he likes, so he’s the barometer for me.

Well, every person, besides my son, ate at least 2 donuts! And my father-in-law raved about it! All 12 donuts were gone in less than an hour.

Then my friend, Emily, tried it and said it was perfect!

What are Mochi Donuts?

The perfect baked mochi donut is crunchy on the outside and soft and chewy inside. And they’re naturally gluten-free.

I’ve seen it spelled both ways. Surprisingly, doughnut is the proper spelling and donut is the American shortcut way to spell it.

Are these donuts baked or fried?

These mochi donuts are baked in the oven, with donut pans. Baking them is less messy than frying but it also means that they won’t turn out exactly like donuts. The donut pans just make them easier to make because you don’t have to shape them by hand like traditional donuts.

The texture comes out sticky and chewy. So make sure to get the right kind of flour. You can find mochiko sweet rice flour at Asian grocery stores or on Amazon.

Can I make them dairy-free?

Yes! Check out the original recipe on Snixy Kitchen’s site. She uses coconut milk. There’s also butter in this recipe so you would have to sub out the butter for a vegan butter?

I haven’t tried it yet so let me know how it turns out. Also, keep in mind that using different ingredients may change the baking time.

Can I make these as cupcakes?

Yes, but I don’t have the cooking time for it yet. You can test it out yourself in the meantime.

Where do I buy donut pans?

You can find donut pans at your local craft supply store, like Joann’s, Michael’s, or on Amazon.

Do I need a stand mixer?

No, you can mix by hand but a stand mixer makes it a bit more convenient. I have a pink Kitchenaid stand mixer and I almost sold it because I hadn’t used it in 5 years. But here I am now, putting it to good use.

Want more desserts? Check out s’mores in the oven.

This post contains affiliate links, where I earn a small portion of your purchase on qualifying products. 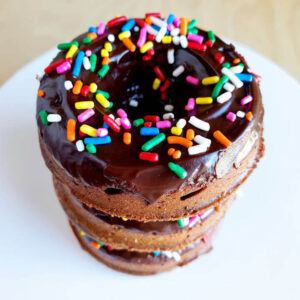 Please LEAVE A STAR RATING and COMMENT! Help GET THIS RECIPE FOUND by more people.