I used to think that I had to go to the county fair to get funnel cake. There’s a popular funnel cake vendor at our local county fair called Fanny’s Fabulous Funnel Cakes.

Of course, their name caught my attention because my name is also Fanny and it’s an uncommon name. They make amazing funnel cakes with toppings like strawberry compote and whipped cream and Bavarian cream.

Then I thought, why can’t this Fanny make funnel cakes too? And I discovered out how easy it is to make at home!!!

It tastes good with powdered sugar alone or with whipped cream and fruit.

Why do they call it funnel cake?

Funnel cake is made by pouring batter from a funnel, silly! J/K. I had no idea that’s why it was called funnel cake either until I made this recipe.

What tools do I need?

Candy thermometer that can show temperature of 375 degrees.

Funnel – I bought this from Amazon. The largest one in the set works well.

What kind of funnel do I need?

Use a large funnel with a 1/2 inch opening.

How do you make funnel cakes without a funnel?

Funnels can be purchased on Amazon or grocery stores for under $5. If you don’t have a funnel or don’t want to buy one, you can use a measuring cup. But the funnel makes it have a more uniform shape.

Is funnel cake made from pancake batter?

I tried different recipes until I found this one that has the perfect consistency, to pour through a funnel quickly.

Here’s how to make funnel cake from scratch.

What oil is best for funnel cake?

Use a neutral tasting oil like canola and also one that can handle high heat. Don’t use coconut or olive oil!

How do you make funnel cake crispy?

Make sure that you cook the funnel cake until it’s a golden brown. So you have to cook it long enough until it browns on both sides.

If it’s light brown, then it will be a soggy texture.

How do you pour the batter to get the funnel cake shape?

Use a small pan because the funnel cake will take the shape of the pan. I used an 8 inch cast iron skillet and that size made a fairly large funnel cake.

Pour the batter in a circular eight motion, overlapping as you go, until you fill in the gaps in the pan.

FYI: sometimes it will come out looking like an amoeba, if too much batter gathers in one spot, but with practice you will get the county fair “look.”

Why is my funnel cake falling apart?

When I first made funnel cake, it fell apart, like the batter broke apart as I was pouring it into the hot oil. That was because the batter was too thick and so it poured out of the funnel too slow.

If this happens to you, add milk, a little at a time until it can pour out of the funnel fast, like in my video. If the batter is too watery, then it pour out too stringy and will clump together like a big blob!

This post contains affiliate links. When you make a qualifying purchase, I receive a small commission. 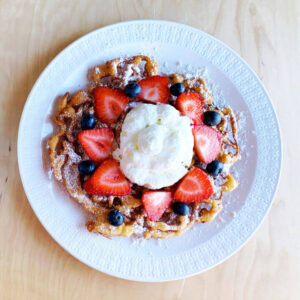 When heating the oil, leave the thermometer in the pan during cooking. When it reaches 375 degrees, you might have to lower the temperature if the oil heats up too fast and keeps getting hotter and past 400 degrees. You’ll have to figure out what setting on your stove works for you to keep a constant 375 degrees. If the batter pours too slowly, then it may be too thick. Add more milk, a little at a time, to thin it out. It should pour out of the funnel quickly. If you don’t have a funnel, use a measuring cup. Make sure the funnel cake is a golden brown so that it will be crunchy.
Please LEAVE A STAR RATING and COMMENT! Help GET THIS RECIPE FOUND by more people.