Want buttery, juicy, creamy corn on the cob? I made it 2 ways in the Instant Pot!

I grew up eating it plain, steamed because that’s how we do it in California. But I was intrigued when I saw others on Facebook, cooking it in milk and butter?

When I finally tried corn on the cob with milk and butter, it reminded me of KFC corn! I know!

So why would you want to add milk and butter to corn, you ask? Because it boosts the flavor of the corn and makes it sweeter and juicier!

Of course, fresh corn from the farmers market are the best. But if you weren’t able to get it there and got corn from the supermarket, then this milk and butter method really adds more flavor to the corn!

Yes, I was a little skeptical at first because we cook corn plain here, boring San Franciscans. And Chinese people just don’t cook corn with milk, not at home anyway.

Try These Other Instant Pot Recipes:

In my YouTube video above, I show you how to make corn, plain and steamed, and then with milk and butter, both in the Instant Pot! You’ll see how to do it with quick release or natural release.

The other way I make corn is in my flat bottom wok on a steaming rack, because I can fit all the corn whole.

The advantage of cooking corn in the Instant Pot is that I don’t have to watch the pot as closely as I do my wok. It really is easier.

But with the Instant Pot, it’s a little tricky to fit the corn on the cob inside. You’ll either have to trim the ends, break in half, or lay it so that they fit inside the pot when you close the lid.

Recipes for Instant Pot Corn Plain and with Milk 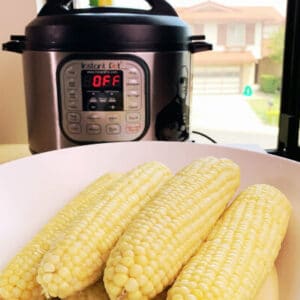 Instant Pot Corn on the Cob with Milk and Butter